If you need to scrub up on your knowledge of the markets, watch the free video above or subscribe to the Rask Australia YouTube channel — it’s free.

Cimic Group was formerly called Leighton Holdings. The company changed its name shortly after some bribery scandals emerged in the news and it was acquired by its majority shareholder, Spanish firm Grupo ACS. Cimic is now a major international construction and mining contractor with brands like UGL, CPB Contractors, Thiess, Broad and Sedgman under its banner.

As reported by Rask Media, Cimic Group released its annual report revealing to investors the extent of the impact of its recent BICC divestment to its financial accounts. Cimic shares were trading 7% higher as a result, probably due to management stating that there is more than $150 billion of construction work up for grabs in its key markets in 2020, and much more in 2021 and beyond.

Lovisa is a fast-fashion jewellery retailer that was founded in 2010 by managing director Shane Fallscheer in partnership with private investment group BB Retail Capital (BBRC). Since then, the company has quickly grown to over 350 stores across Australia, South Africa, the UK and throughout the world.

Shares in the Australian fast retail store owner rose 8.8% today to be the largest percentage gainer in the All Ords index. Although no material news was released by Lovisa, investors might be excited by the news that one of its key competitors, Colette, has filed for administration.

Despite boasting some 140 stores in Australia and New Zealand, Colette appears to have been hurt by the weak retail climate. Fellow businesses such as Harris Scarfe, Bardot and Jeanswest have also decided to close shop in recent months. The administrator, Deloitte, is planning to continue trading until it can either sell or recapitalise the Colette business. 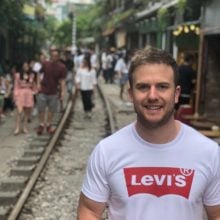 Owen Raszkiewicz is the Founder of Rask Australia and lead educator at Rask Education. He is host of The Australian Investors Podcast and co-host of The Australian Finance Podcast. When Owen is not reading about finance he's following Chelsea, Hawthorn Hawks and the Storm. He holds a Master's Degree in Financial Planning, a Master's Degree in Applied Finance, Bachelor's Degree in Technology, and has passed level 1 of the Chartered Financial Analyst program amongst other things.